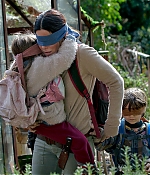 People has the first look of Sandra Bullock in Bird Box, that will be released next December 21. The trailer, as Netflix social media is announcing, will arrive tomorrow!

After successfully pulling off a heist in this summer’s Ocean’s 8, Sandra Bullock and Sarah Paulson are back together for Netflix’s upcoming thriller, Bird Box.

Paulson and Bullock play sisters in the movie who are suddenly thrust into an mysterious apocalyptic environment where people around them start to behave abnormally for seemingly no reason. But even though the plot was darker than their previous movie, Paulson, 43, and Bullock, 54, still managed to bring comedy to the thriller, out Dec. 21.

“They are a bit like sisters. Like between takes, they were talking one time and I was like, ‘Hey girls, I’m actually trying to direct you!’ ” director Susanne Bier tells PEOPLE in the latest issue. “It was hugely important that there be a sense of humor in it, that it wasn’t gonna be a just entirely dark, scary film.”

Luckily for Bier, Paulson and Bullock already came in with a chemistry that will have viewers laughing within seconds of their first scene together.

“You had a very strong feeling of something beyond the friendly relationship between actresses,” Bier says. “There is a real strong connection between the two of them and they had a lot of fun. And I think that’s exactly what you see in the movie, there’s a very direct understanding of one another.”

But the movie is still very much a suspenseful thriller, filled with the mystery of what exactly is causing people to lose their minds. For reasons we won’t spoil here, people learn they must wear blindfolds when they go outside — and Bullock took this seriously.